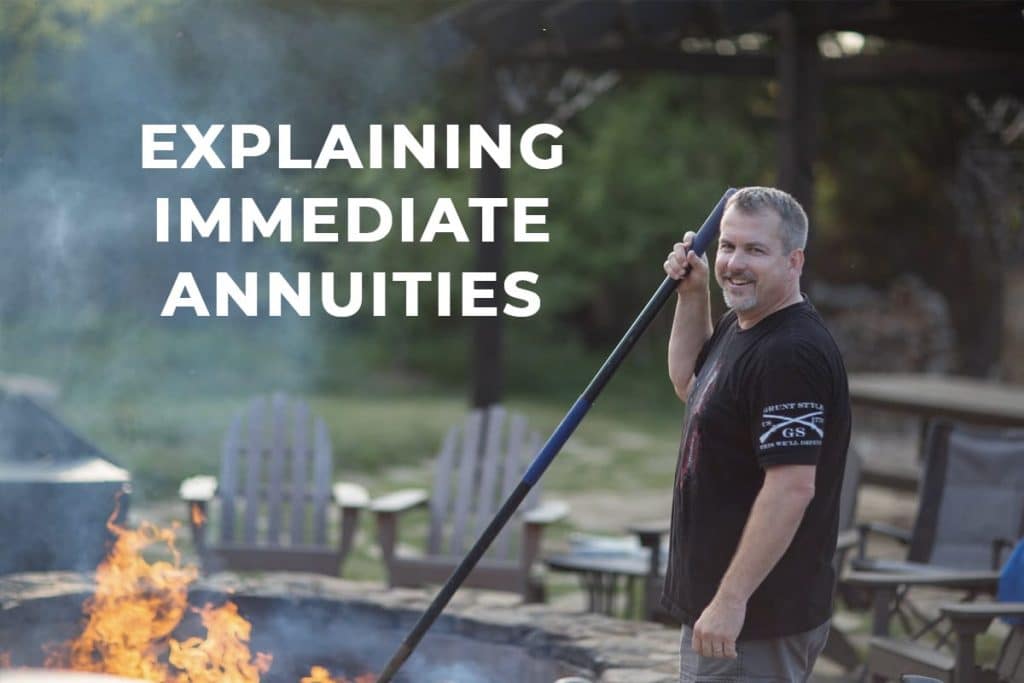 There are two overarching types of annuities, immediate and deferred. Within deferred there are 3 types, variable, fixed, and fixed indexed. I’m not going to get caught up in all the different names that people have for them. I’m just going to use names that are primarily acknowledged by the Insurance Commissioner of each state.

Let’s jump into the immediate annuity. The immediate annuity is a product that the insured (the person who’s buying the annuity) puts in a lump sum of money. Let’s say they put down $100,000. Then based on a single or a joint lifetime payout, it’s going to determine how long they can receive the payout and for what dollar amount… it’s all based on their age. To determine this, they have an actuarial number. Let’s say the client is 50 years old, their life expectancy is to age 80. The insurance companies are going to say “$____ is what we can afford to pay based on that.”

If the client lives longer than age 80, the Insurance Company still has to make the payments, but if they pass away before age 80, the money is gone…Unless you do something called a “return of premium”. Return of Premium is if you die prematurely, whatever is left in that annuity would go to your heirs. Or you have something called a period certain it just simply means there’s a specific time frame, the annuity will payout. Then you have a period certain with a lifetime of income, so let’s say you have a 20-year period certain, and you pass away at year 15, that means your beneficiaries are going to be paid for the rest of the five years, the same amount you’re being paid. At the end of the 20th year, it’s completely gone. If you have a 20-year period certain with life, that means even if you surpass the 20 years, the income will continue to pay for the rest of your lifetime. Then, if you have a period certain with life and joint lifetime payout, it would continue to pay your spouse if you die.

There are no shortages of nuances and different features with immediate annuities, but this is a broad, generalized overview of how they work. The way that I think about (most) immediate annuities is that it’s like writing a check to the insurance company and kissing it goodbye because of the common limitations to access the money. I personally believe it’s a very rare scenario where an immediate annuity is the best option for an individual.

I hope this helps you understand immediate annuities a little bit better.

Hello, my name is Chad Owen, The Annuity Sales Coach.

I have written over $150,000,000 in fixed annuities since 2008. I make all my own calls, run all my appointments, write my own applications, and do all my own follow-up calls. I am the founder and president of Retirement Realized Agents Academy, where I teach agents to do what I do and transform their business.

Thanks for subscribing! Please check your email for further instructions.

Something went wrong. Please check your entries and try again.

This website uses cookies to improve your experience while you navigate through the website. Out of these, the cookies that are categorized as necessary are stored on your browser as they are essential for the working of basic functionalities of the website. We also use third-party cookies that help us analyze and understand how you use this website. These cookies will be stored in your browser only with your consent. You also have the option to opt-out of these cookies. But opting out of some of these cookies may affect your browsing experience.
Necessary Always Enabled
Necessary cookies are absolutely essential for the website to function properly. This category only includes cookies that ensures basic functionalities and security features of the website. These cookies do not store any personal information.
Non-necessary
Any cookies that may not be particularly necessary for the website to function and is used specifically to collect user personal data via analytics, ads, other embedded contents are termed as non-necessary cookies. It is mandatory to procure user consent prior to running these cookies on your website.
SAVE & ACCEPT
[class^="wpforms-"]
[class^="wpforms-"]